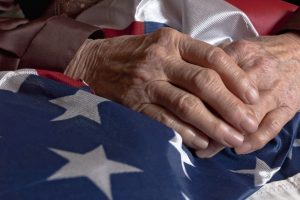 For Americans, Veterans Day originated as “Armistice Day” on November 11, 1919, the first anniversary of the end of World War I. In 1926, Congress passed a resolution for an annual observance, and November 11th became an official national holiday beginning in 1938. Since that time, Veteran’s Day has been one of America’s most important holidays because it celebrates and honors our veterans for their willingness to serve and sacrifice for the common good, their love of their country and their patriotism.

On November 11th of this year, Lighthouse Senior Living of Ellicott City honored its veterans with a touching tribute that included pomp and circumstance, music and prominent guest speakers and more. Several members of the local community gave speeches, honoring the men and women who served our country and praising them for their dedication and sacrifice.

Fellow residents celebrated veterans with a heartwarming musical performance that included patriotic and military songs. But the real heros of the day were the 17 members of the Lighthouse community who served their country. Each veteran was given a commemorative certificate and pin in gratitude of their service.

Former WJLA sportscaster and frequent host of the Mid-Atlantic Sports Report on MASN, Alex Parker, is a member of the Lighthouse family. He was on hand to capture this celebration on video, as well as personal stories shared by some of the veterans. Thanks to “The Greatest Generation”, this country has enjoyed freedom and democracy for decades. As WWII reporter Elmer Davis said, “This nation will remain the land of the free only so long as it is the home of the brave.” View the full video below: