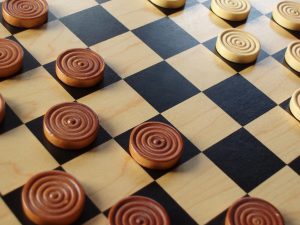 Wherever two or more seniors gather, there’s a good chance that games will ensue. There’s nothing like a good card or board game to get the mind working, the competitive juices flowing, and the conversation going.

However, it’s important that games for seniors do more than run the gamut from “b” (bingo) to “b” (bridge). Variety is important—not only to reduce boredom but also to stimulate the brain. Research shows that novelty is an important component for achieving mental stimulation. If our brains do the same tasks over and over again—whether it’s covering the numbers on a bingo card or repeatedly playing solitaire—then there will most certainly be diminishing cognitive returns.

With that in mind, here are a few games that seniors may enjoy to spice up their game-playing enjoyment.

Quiddler. Think of Quiddler as Scrabble with cards. Each card has a letter and a point value. Rearrange the cards to form words, starting with three cards and working your way up to 10. Players can earn bonus points by coming up with the most words or the longest words. Players are allowed to look up words in the dictionary when it’s not their turn, thus expanding their vocabulary.

Five Crowns. Five Crowns is a little bit like rummy on steroids. There are five suits instead of the traditional four, with a rotating wild card that makes the game just a little bit unpredictable. The card game starts with just three cards but gets increasingly difficult as players add a card per round up to a total of 13. The game offers the right combination of luck and skill, making it possible for anyone to win.

Skip-Bo. Skip-Bo is a more challenging version of the UNO card game, with players racing against each other to get rid of a stack of cards. The skill set is similar to Solitaire, in that you have to create stacks of sequentially numbered cards (from 1-12). The key is to play your cards in the middle stacks while blocking your opponents from playing theirs. The Skip-Bo wild card adds some unpredictability.

Bananagrams. For reasons known only to the creators of Bananagrams, the letter tiles for this game come in a yellow zippered poach shaped like a banana. This game isn’t about earning points—it’s about speed. Work as quickly as you can to arrange your letter tiles into words in a crossroad grid. Whoever uses up their letters first, provided that their grid is made up of legitimate words, is the winner.

Boggle. The classic word-search game Boggle, from the makers of Scrabble, gives players just three minutes to find as many words as possible in a 4-by-4-inch letter grid. Players only score points if they spell words from the letter cubes that no one else has found. The game rewards speed and creativity, and also is a great way for players to expand their vocabulary.

Cranium. Cranium is described as a “whole brain” game, in that it tests both creativity and logic. The game is a hybrid of various other games, such as Pictionary, Trivial Pursuit, and Charades. Players may have to sculpt an item out of clay, act out a word, impersonate a celebrity, answer a trivia question, or show off their spelling skills to win the game.

Balderdash. Virtually no one will know the words that require definitions in the game of Balderdash. But that’s where the fun starts. Players need to tap into their inner creativity to make up convincing definitions and score points when their opponents are duped into believing that their fake definition is the real thing.

Taboo. In Taboo, the important thing is what you don’t say. To get their team to guess the featured word on the game card, players must steer clear of the five “off-limit” words in describing it. Say one of the forbidden words, and the opposing team will press the buzzer to let you know it.

Qwirkle. It’s not a board game, per se, but Qwirkle does have tiles depicting six shapes in six different colors that are arranged on the table. It’s a little like dominos, but instead of matching numbers, you’re matching colors or shapes. Players can score bonus points for multiple directions and by completing a line that contains all six shapes or colors.

In addition to this small sampling, there are countless more games that seniors can enjoy. Many seniors may enjoy the more fast-paced thrill of video games. The important thing is to do something that keeps the brain active and engaged while interacting with others and having fun.