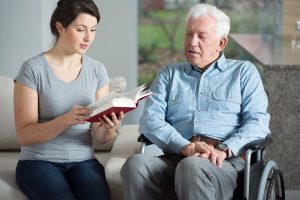 Aphasia is a disorder that robs the afflicted of the ability to understand language and communicate normally. It is not a mental illness, and it does not result in an impairment of intelligence. This condition can affect younger people, usually as the result of head trauma, but it is especially prevalent in older adults who have experienced one or multiple strokes. In some cases, aphasia is caused by a slowly-expanding brain tumor that causes degenerative damage.

An estimated one million people in the United States suffer from aphasia and, according to the American Speech-Language-Hearing Association, there are approximately 180,000 new cases of aphasia in the U.S. each year. Since aphasia robs patients of the ability to speak, understand, write or communicate with others, it can be very difficult for both the patient and their loved ones. Aphasia can lead to feelings of depression and isolation and can negatively impact quality of life. There are three different types of aphasia: Expressive, Global and Comprehensive.

Patients with comprehensive aphasia can often understand what others are saying, but may struggle to communicate verbally themselves. Comprehensive aphasia includes symptoms such as:
Speaking in slow, halting sentences.
Mixing up common words while speaking.
Having difficulty speaking every word single in a sentence, and instead speaking in shortened phrases (e.g. “go store” instead of “go to the store”).
Demonstrating frustration at an inability to communicate fully, using appropriate sentences.

Treatments and Tips for Aphasia

Aphasia can be temporary and may resolve after a couple of months following the onset of symptoms. However, if the symptoms of aphasia last longer than a few months following a stroke, complete recovery is very unlikely. It should be noted that some people continue to improve gradually over several years. Early intervention is generally thought to be the key to achieving a better quality of life with this disorder. Depending on the severity of the condition, language and speech therapy can help those with aphasia communicate with others. Treatments for aphasia include:

The Highest Quality of Aphasia Care

In some cases, aphasia can be a sign of an underlying health issue, so it’s important to contact a doctor right away if you or a loved one begin showing symptoms. At Lighthouse Senior Living, we take a well-rounded approach to the care of our residents, always considering their physical, mental and emotional well-being. Contact us today to schedule a virtual tour and learn more about our services.