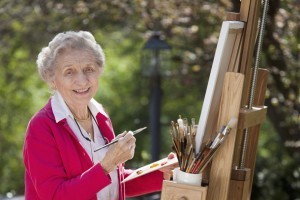 Here’s an inspiring thought: Your most creative, enjoyable and fulfilling pursuits may lie ahead. By starting a new activity or developing a hobby that engages your mind, you will be able to live your later life to its fullest — while also maintaining a healthy brain.

In many cases, adults in their later years are doing more than finding a hobby. They are finding their passions. A septuagenarian who has never taken a brush to canvas may find herself excelling at art. A retired executive who never showed any musical proclivity may take up the violin with exceptionally melodious results. A grandmother who spent years caring for her grandchildren may discover, now that she has time to sit down at a computer, that she has a genuine talent for writing short stories.

Age Should Not Be a Deterrent

The notion that people who have reached their 70s and 80s are generally in mental decline can be disproven by seniors who are mastering activities that they’ve never tried before. Those who are fearful that they no longer have the mental acuity to learn something new should be heartened by the latest neuroscientific research, which shows that people can become proficient in new endeavors at any age.

“Whereas it used to be thought that the brain stops producing new neurons at a certain time of life, we now know that the process of neurogenesis — the creation of new brain cells — happens pretty much throughout life,” says Marcus Conyers, co-author of Positively Smarter: Science and Strategies for Increasing Happiness, Achievement, and Well-Being. “We also know that the brain, as long as it stays healthy, will continue to make new connections. So, what that means is, contrary to the old saying that you can’t teach an old dog new tricks, we have the capacity throughout our lives to learn new skills, new hobbies and new strategies and adopt new attitudes.”

Conyers point to four key factors that typically foster the brain connections necessary to master new skills. They include:

“With novelty, challenge, practice and feedback, our brains are able to develop new skills, attitudes and strategies at any point in our lives,” Conyers says.

Conyers, whose study of the human brain spans three decades, was pleased to see his own mother, Hazel Powell, take on a new endeavor later in life. Discouraged by a perception that she lacked artistic abilities during elementary school, Hazel didn’t discover her true talents until many decades later when she attended an artist’s presentation at a local women’s institute. When the artist called for members of the audience to come forward and try a bit of painting, Hazel overcame her reticence and did just that.

That was the spark Hazel needed. Soon she was taking art classes and developing her talent. In the ensuing years, her art was put on display in a local gallery and at restaurants where she lives in Cambridge, England. She’s also had the thrill of selling her art and seeing her work featured in an international magazine.

“Psychologically, it’s given her a new lease on life and changed the way she views the world around her,” Conyers says. “And this type of thing can be done at almost any age. There’s no reason why individuals in their later years can’t take up art or learn to play a musical instrument or try their hand at writing. All of these are learnable skills.”

Older adults shouldn’t expect to cultivate these skills entirely on their own, however. “What I would suggest is to seek out a teacher and/or a mentor,” Conyers says. “Look for a person who can give you encouragement, inspiration and guidance, which is the feedback that enables you to improve.”

Other hobbies that seniors might enjoy may include gardening, cooking or furniture restoration. Like the creative endeavors previously mentioned, these types of activities can have a positive impact on the brain.

“I would recommend pursuing anything that offers enough challenge to make your brain work,” Conyers says. “A good metaphor that I like to use is the brain is a muscle, so it’s important to have a challenging hobby that makes you really think. The more you think, the more you learn and the sharper your brain becomes.”

The same advantages apply to taking up a sport later in life. “Tai chi, for example, is a fabulous thing for people to learn later in life,” Conyers says. “Everyone starts off not being able to do it, but over time — because of novelty, challenge, practice and feedback — people tend to get better and better at it.”

If the hobby you choose has a socialization aspect, then all the better. “Socialization is important for brain health,” Conyers says. “In my mother’s case, she had the opportunity to strengthen her social brain by getting together with others to paint.”

Ideally, finding a creative pursuit or hobby can stave off the mental decline that many fear later in life. “We know, based on AARP research, that staying mentally sharp is one of the top goals of the population as we age,” Conyers says. “So, if you decide to go to a tai chi lesson or take up art or anything else, my advice is to be like my mom. Get in there. Get engaged. Be brave and go for it. Nothing happens if you’re passive. It’s your courageous, active engagement that really transforms the brain.”