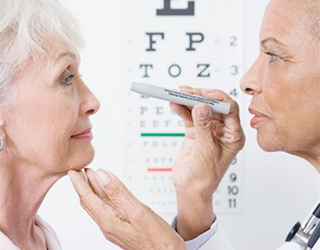 Prevent Blindness America wants Americans to know that while cataracts are still the most common cause of blindness, they are also treatable. In fact, thanks in part to increasingly advanced, more effective surgical techniques for cataracts, today’s older adults are reporting fewer visual impairments than the preceding generation of seniors.

According to a Northwestern University study published in Ophthalmology, visual impairment in seniors 65 and older dropped 58% between 1984-2010. At the same time, the overall prevalence of visual impairment in the U.S. is still increasing, reports the Journal of the American Medical Association, due in part to growing numbers of elderly with diabetes-related eye problems.

That means there is still work to do when it comes to detecting and treating senior eye health conditions. Fortunately, modern medicine has made a lot of progress in certain areas, and that includes cataract detection and treatment.

Angelo P. Tanna, M.D., first author of the Ophthalmology study, credited the improvement of techniques and outcomes for cataract surgery as one of the likely reasons for the decline in visual impairment.

He also noted that a decrease in smoking over the past few decades has resulted in less macular degeneration; also, treatments for diabetic eye disease have been more effective and available.

“The findings are exciting, because they suggest that currently used diagnostic and screening tools and therapeutic interventions for various ophthalmic diseases are helping to prolong the vision of elderly Americans,”Tanna said.

Nearly all cataract surgeries today are conducted using a technique called “phacoemulsification,” which removes the cataract and replaces the intraocular lens in just 30-45 minutes. Not only is the procedure quick and relatively painless, more than 95% of patients experience significant improvements to their vision, according to the Eye Surgery Education Council.

Some of the most recent advances to cataract surgery are smaller incisions and better lens technologies, as well as more powerful laser procedures to correct residual vision problems that may occur after surgery.

Improving Eye Care in the Elderly

The positive outcome of these advances is, obviously, a higher success rate for cataract surgery, as well as better senior eye health. Senior eye health can be improved through a healthy diet and better nutrition, in addition to eye health supplements and vitamins.

A less obvious consequence of improving eye care in the elderly, is better overall physical health and well-being. In conjunction with the decline in vision problems, the Ophthalmology study reported an increased ability of the elderly to conduct activities of independent living such as dressing and bathing.

Another study in the Journal of the American Medical Association found that patients over the age of 65 who had cataract surgery were less likely to suffer hip fractures than those who had not been treated.

Ongoing studies such as these, and the monitoring conducted by the Agency for Healthcare Research and Quality, enables researchers to continue making improvements to the detection and treatment of senior vision problems.

An important factor in the success of cataract treatment and other eye procedures is, of course, public awareness — there are still more than 24 million Americans over age 40 with cataracts, according to Prevent Blindness America, and left untreated, they can lead to serious visual impairment, reduced quality of life and vision loss.

As cataracts often develop slowly and painlessly, many people do not realize they have them until their vision is impaired.

“Although getting a cataract is common, it doesn’t have to mean permanent vision loss,” said Hugh R. Parry, president and CEO of Prevent Blindness America.”

One way to protect our vision is to make a commitment to take care of our eyes today, including getting a dilated eye exam, so we can help protect our sight for the future not just from cataract, but other eye diseases as well.